Out to buy a bridge camera and don’t know which one to choose? The list below might shed some light on your confusion and help you decide which bridge camera best suit you.

The Canon Powershot G3 X is the latest in the line of Canon’s bridge camera series, offering a larger sensor in a compact body. Like the Panasonic FZ300, it also carries a more “modest” zoom range of 24600mm (35mm equivalent) compared to the incredible reach of the Coolpix P900, but does so in a much slimmer body.  The one thing it lacks compared to the other two is a built-in viewﬁnder – Canon offers you an additional purchase of a hotshoe EVF instead. The rear LCD is also slightly less versatile than the other two, with tilt but not swing capabilities. However, it does compensate by adding the element of touch and being able to ﬂ ip up to what’s commonly referred to as “selﬁe” mode. Unfortunately, the camera doesn’t function any differently this way, so you’ll have to rely on touch shutter to take the picture.

The body itself is made to be weather resistant, and feels solid in the hands, while not being too bulky. The handgrip is just about deep enough to allow for a proper hold of the camera, and the lens doesn’t extend out too far in operation, allowing you to maintain stability even at the zoom’s extents.  One thing we wish could have been better implemented though; is the continuous ring that’s found around the lens. 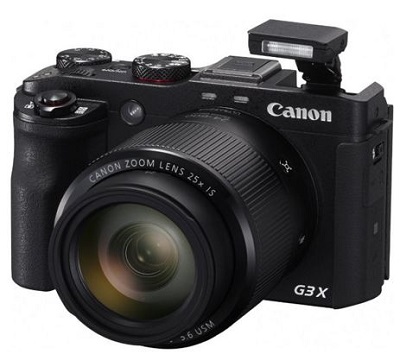 At the moment it appears the continuous ring can only be used to adjust one function based on the mode you’re in. Which means in Program mode you can only use it to adjust your ISO setting or for manual focusing, which seems a real waste when it could easily be used to adjust other settings or as a zoom ring for the camera. That would deﬁnitely speed things up for stills photography, and add more options to the user.

In terms of speed and responsiveness, the Powershot G3 X felt like it was somewhere in between the Nikon and the Panasonic cameras. Still responsive enough in practice; but not quite the fastest. The camera was fairly fast to respond without too much lag between shots, but we did ﬁnd ourselves a little frustrated by the implementation of the autofocus system. Despite having 31 contrast-detect autofocus points across the frame, the Powershot G3 X only offers two methods of autofocus – face detect with subject tracking and one-point, neither of which offer the ﬂexibility needed of a bridge camera. The major saving grace though, is the much larger 1-inch sensor, as it allows the camera to produce images with less noise and better details than the other two, while turning in the best high ISO performance. We’d use images taken at ISO levels up to 3200 without hesitation, and ISO 6400 should be usable for prints after some sharpening in post.

While it’s listed as a “bridge camera”, the CoolPix P900 isn’t exactly what you would call compact. What you do get is an incredible telephoto reach of 2000mm (35mm equivalent) in something that will ﬁt easily into a sling bag or backpack, which is quite a feat in itself.  There’s a nice, deep handgrip, and the camera feels well-balanced in the hand. The vari-angle LCD is a nice touch, and the electronic viewﬁnder certainly comes in handy when you’re trying to stabilize the camera. The menu system is very much like what you will ﬁnd on Nikon’s 1 series mirrorless cameras – pretty simpliﬁed, with no option to shoot to RAW format. What is handy though; is the option to specify a start-up zoom position so if you’re on a birding trip for example, you won’t lose precious seconds waiting for the lens to go from full wide to telephoto.

Also present, are a variety of shooting modes that you can choose from to best match your situation. There’s the usual Single, Continuous Low and Continuous High, but now you have the option to use a Pre-shooting cache mode which essentially starts taking images as soon as you half-depress the shutter to focus and stops after you fully depress the shutter. It’s a handy function to have when you’re trying to capture unpredictable motion, but the image size of each shot is reduced to 1,280 x 960, which is only just about usable for web purposes. 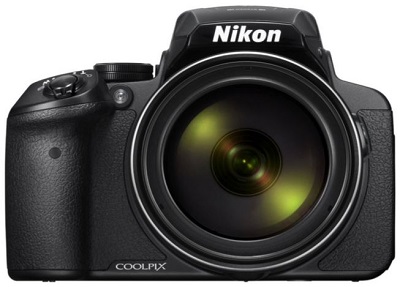 Wi-Fi capabilities have been added so you can shoot direct to a smart device, but what is interesting is that Nikon has added GPS/GLONASS/QZSS support that tracks your location via satellite. This lets you mark speciﬁc locations where you are at so that you can revisit them at later dates; probably something useful for the serious traveler.

In terms of reach, there certainly is no beating the CoolPix P900. The 83x optical zoom brings you an optical zoom equivalent of a 2000mm telephoto lens, in a decidedly smaller and lighter package. Focus is fairly fast even at the full extents – on par with the Powershot G3 X but slower than the Lumix DMC-FZ300. Like the G3 X, the CoolPix P900 has a feature where pressing a button zooms out temporarily to let you ﬁ nd your subject before zooming back in (with focus), which certainly helps with framing your subject. There isn’t RAW support on the camera, and the 7fps burst mode is also slightly limited in the sense that the buffer ﬁ lls after seven shots, but the bigger factor is that images at max zoom tend to be a little soft. However, if you really want telephoto reach without the investment of a full DSLR and lens, then there’s nothing else quite like it.

The Panasonic Lumix DMC-FZ300 is a very interesting proposition, being the smallest and lightest camera in this list. The camera comes with a nice, deep handgrip but the real standout feature is its 25-600mm f/2.8 lens. That’s matched with a 12-megapixel BSI CMOS sensor and an updated Venus Engine processor which allows for a native ISO of 6400.  The main control dials are nicely knurled for better feel, and the function buttons are very nicely spread out overall so that everything remains within reach. Zooming is achieved either by the lever in front, or via a slide lever on the lens. While there is also a rotary dial on the lens, that’s used for the selection of macro focus modes (AF Macro, Macro Zoom, or Macro off), and for manual focusing, during which the central portion of the frame is enlarged to help you better judge sharpness.

Unlike the other two, the DMC-FZ300 utilizes in-body image stabilization as compared to lens-based image stabilization. And the difference is immediately visible just in terms of how much smoother the image on the rear LCD is when the camera is zoomed in to the extremes. Where the G3 X and the Coolpix P900 would almost leave you with a headache due to the jerkiness, the Lumix DMC-FZ300 remains stable enough for you to pan and search for your target without having to zoom out.   Worthy of mention, is the touch interface on the Lumix DMC-FZ300. Everything is organized neatly into “drawers” which you can assign almost of the camera’s functions to, letting you set the camera up just as you would like it. That’s taking advantage of touch capabilities, and offers a degree of customization that heavy users will deﬁnitely appreciate. 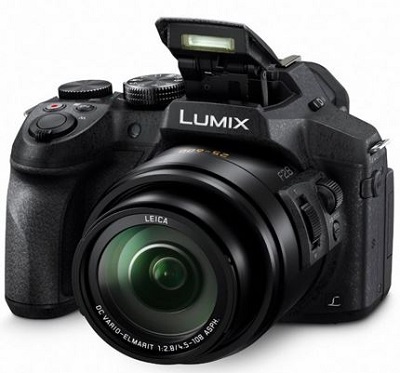 The Lumix DMC-FZ300 has the best handling in the list. The Hybrid OIS also made it the easiest to use across the entire zoom range, keeping the live view display stable enough to use for composition at its extremes, thus saving you from zooming out. It’s also great up close, with a macro function that lets you focus on objects with a minimum focus distance of just 1cm. Autofocus speed was miles ahead of the other two; thanks to Panasonic’s Depth from Defocus technology. And we liked the implementation of the 4K burst photo modes, as pulling out select frames from a video clip is certainly easier than trying to time the shot just right. Importantly, the 8-megapixel (3,840 x 2,160) images you get from these modes are still large enough to be usable for prints. Finally, the Lumix DMC-FZ300 also offers the best video functions, with 4K at up to 30p and a microphone input for better audio recording.

And our best bridge camera is…

This was a really close call between all three cameras as each offered something the others didn’t. The CoolPix P900 obviously had the greatest reach, albeit at reduced quality towards the extremes. The Powershot G3 X on the other hand, had the best image quality thanks to the larger sensor. Where the Panasonic Lumix DMC-FZ300 stands out however, is in how it is consistently good across the board. You can obviously go far with it – the in-body stabilization helps greatly in getting a stable image – but you can also go extremely close-up thanks to the minimum focusing distance of just 1cm. Crucially though, is how much better the autofocus performance is and the ease of use of the camera overall. Despite the slightly lower image quality due to a smaller sensor, its overall set of features, ease of use and performance won us over.