Aptly named for their extreme coverage (180 degrees for the Nikon versions), ﬁsheye lenses trade straight-line correction for a wraparound view. These were in vogue in the 1970’s, and there used to be many different designs, with the basic distinction being between circular (projecting a circular image on the sensor surrounded by black) and the self-explanatory full-frame. The extreme imagery possible made them a novelty initially, but the overwhelming barrel distortion can make anything more than occasional use repetitive and over-the-top.

Despite being designed for DX camera bodies, the Nikon 10.5mm lacks AF-S autofocus, so you have to focus manually on cameras like the D3100, D3200 and D5100. As with Samyang fisheye which can’t autofocus on any body, this isn’t too much of a problem in practical use. On bodies like the D7000 and D300s, which feature a screwdrive, autofocus is pretty quick and very accurate but a bit noisy. The lens is very compact and lightweight, and you have to be careful not to foul the focus ring with your fingers at least on cameras that offer autofocus. Similar care is needed not to get your fingers too close to the front of the lens barrel, or they can creep into the image. It’s a reminder on how small fisheye lenses are compared with rectilinear ultra-wide lenses of similar focal lengths. 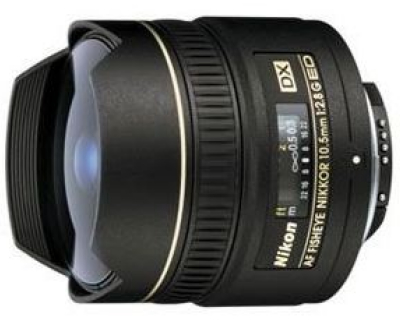 Performance. There’s plenty of sharpness and contrast, and the Nikon 10mm manages to resolve fine detail convincingly, even towards the extreme corners of the frame. It does a good job of fending off ghosting and flare as well but, color fringing can be apparent towards the edges of pictures.

The Korean corporation Samyang now has a UK distributor for its lenses, which are backed by a three-year warranty. Despite being the cheapest lens in this category (and well under half the price of either of the Nikon fisheyes) build quality feels robust. Handling is enhanced by a smooth yet precise focus ring, which you’ll need to use because there’s no autofocus facility on any Nikon body. At least there’s electronic communication with the host camera for aperture, so this can be controlled automatically or manually in all shooting modes. As a diagonal fisheye it claims the usual 180 degree angle of view measured between opposing corners, although it squeezes a little more into the frame than the Nikon 10.5mm. 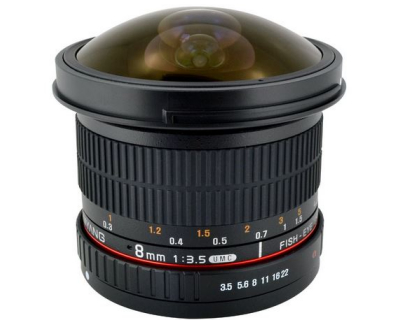 Performance. Sharpness and contrast are impressive and there’s very little vignetting. It also produces little color fringing, even at the extreme corners of the frame, and is resistant to ghosting and flare. The lack of autofocus and the fact that there’s no focus confirmation in the viewfinder isn’t an issue due to the extreme depth of field offered by the lens. Overall, it’s a bargain.