With an angle of view wider than about 60 degrees, and as much as 99 degrees before we reach the strange world of super-wides, shorter focal lengths can squeeze a lot into the frame. Nikon’s 20mm, 24mm, 28mm and 35mm lenses are classics, although these lengths are now embedded in a number of zooms. Using them on a wide open vista with everything distant misses the point of wide-angle style; getting in close to a scene is often more interesting. These lenses are good for environmental portraits, where you can get close to someone but still show their surroundings.

Expensive for a DX-format ultra-wide with a variable aperture through its zoom range, the Nikon costs nearly twice as much as the Sigma 1020mm. The build quality feels as robust as that of the Sigma lens, although the Nikon also has a weather-seal ring around its mounting plate. This is lacking on most other DX-format lenses in this category. Moreover, only the Nikon lens has its zoom ring at the forward end of the lens, and the focus ring towards the rear. This puts the focus ring within easy reach, and because it doesn’t rotate during autofocus, handling isn’t impaired. Handling is good, with smooth, precise operation. 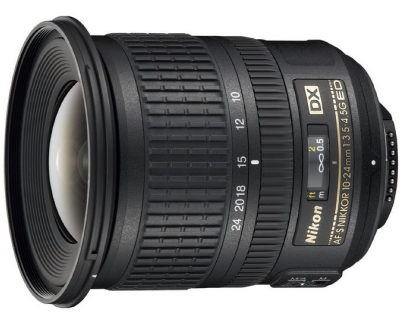 Performance. Contrast is good even at the widest available apertures, and sharpness is maintained into the corners of the frame. The lens wasn’t an over-achiever for sharpness in our lab tests at f/8, but it is consistent across the aperture range and gives superb real-world results. Barrel distortion at the 10mm focal length is typical for a wide-angle lens, but being a genuine Nikon lens, there’s an option for automatic correction in recent Nikon bodies.

This lens has been on the market for eight years and still holds its own against the newer, more expensive, Sigma 10-20mm f/3.5. It’s smaller, lighter, has a 77mm rather than an 88mm filter thread. It lacks a constant aperture throughout the zoom range, but it features most of the same refinements including fast, near-silent, ring type ultrasonic autofocus. The autofocus system comes with full-time manual override and increases the handling qualities of the lens compared with the Tamron equivalent. This is because the focus ring doesn’t rotate during autofocus, so you don’t need to worry about fouling its action during handheld shooting. 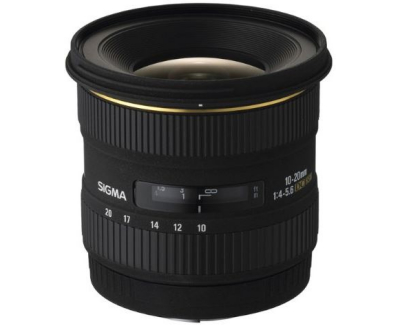 Performance. This lens is actually a little sharper than Sigma’s pricier, constant-aperture counterpart, especially at the short end of the zoom range. Distortions are quite similar between the two, although this cheaper model has less distortion at mid-zoom focal lengths. The only real downside is that colour fringing is fairly pronounced at the short end, but that’s automatically corrected in current Nikon cameras.

This Nikon lens doesn’t quite match the Sigma 12-24mm for angle of view, but it comes close. The maximum works out at 114 degrees compared with the Sigma’s 122 degrees. The Nikon is bigger and weightier, and you certainly get a lot of premium glass for your money. The enormous, bulbous front element stretches almost to the forward edge of the built-in petal-shaped hood as you zoom to the shortest focal length. Even so, ghosting and flare are well contained. Unlike the Nikon 10-24mm DX lens, the zoom ring is placed at the rear of the barrel and the focus ring is further forward. The focus ring is substantially larger and wonderfully precise, despite having a short travel. Autofocus is blazingly fast. Around the back, the lens features a weather-seal ring on its mounting plate. 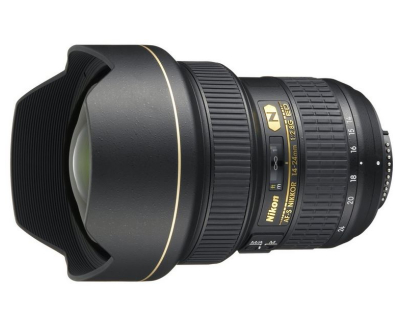 Performance. Contrast is excellent even at the widest available aperture, which remains constant. Sharpness is superb, right into the extreme corners of the frame, especially if you narrow the aperture a little. Color fringing is rather better controlled than with the Sigma 12-24mm lens.

Compact and lightweight for an FX-format ultra-wide lens, the Samyang is one of the cheapest lenses in our roundup. There’s no autofocus facility, but that’s not a problem because the manual focus ring is smooth and has a long travel, enabling very precise adjustments. The focus assist and confirmation lamps in the viewfinder are based solely on the camera’s central AF point. The aperture ring at the rear of the lens is redundant on all Nikon SLRs, and needs to be set to the narrowest setting of f/22. Unfortunately, there’s no switch to lock the aperture ring. 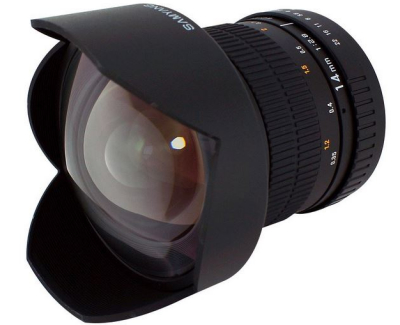 Performance. Sharpness and contrast are disappointing at the widest aperture of f/2.8, but pleasing between apertures of f/4 and f/16. Color fringing is minimal and overall, the lens produces good image quality considering its low price. However, barrel distortion has quite a complex and irregular shape, which makes it difficult to correct.