There is a myriad of iPhone photo accessories, but this one may be the sneakiest of them all.

Spy Cup is a device that looks like a coffee cup, but it’s actually a container for your iPhone that transforms it into a hidden camera. Once the iPhone is inserted inside the cup it becomes invisible.

The device was launched on Kickstarter 3 weeks ago and has surpassed it’s funding goal, see http://spycup.net. The creator of the device, ildar khakimov, believes it can become a fun photo accessory for those who like to shoot with their iPhones: “You ever noticed how people often tense up when they see a camera pointed at them? Spy Cup will let you capture those rare and unscripted moments”.

Spy Cup is shipped with a standard Bluetooth trigger which can be used to capture photos or videos  from up to 30 feet away. It’s currently available for iPhone 5 and 6 only and is not compatible with the larger iPhone 6+ model.

Spy Cup can also be used for street photography as it allows the photographer to keep his iPhone hidden. 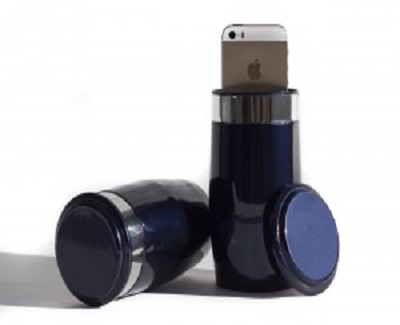 The gadget will retail for $39 once it becomes available in store. There is 2 days left in the campaign if you want to pre-order your Spy Cup. Check out http://spycup.net for details.